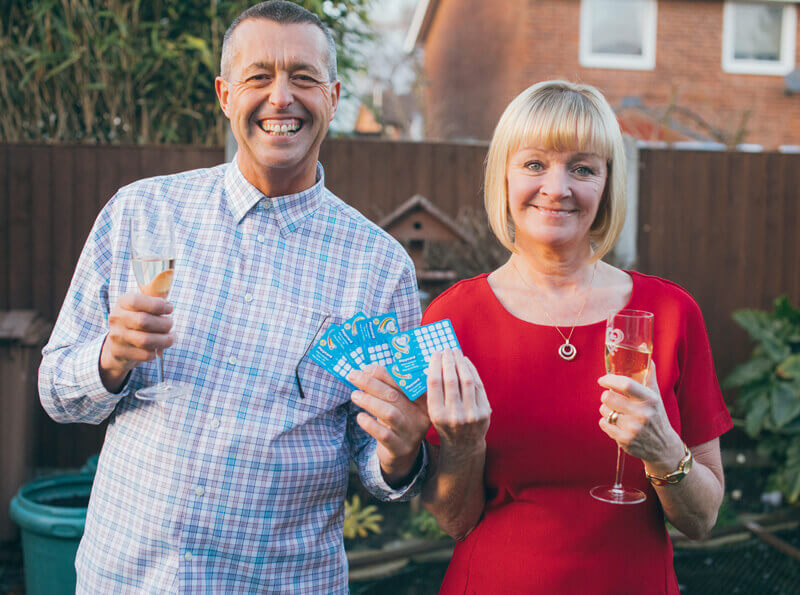 “We had been playing the National Lottery for a couple of years” Martyn explained “but when it went up to £2 and they put the extra numbers on, we thought we’d start playing The Health Lottery instead, where the money goes to local good causes’”.

Martyn confirmed that they had smaller wins more frequently once they started The Health Lottery, winning prizes of £10 or £20 every now and again. Since then he and Vicky play 4 Quick Picks a week, putting their numbers on Friday mornings for the following Saturday night draw.

“I couldn’t believe it when I found out that we had won!” exclaimed Vicky excitedly. “We thought it was going to be a couple of hundred pounds, but then you had a look online” she added gesturing to Martyn.

“I didn’t know whether to laugh or cry! We never win anything” squealed Vicky.

“I had the ticket and I was forever checking my pocket at work on Monday to make sure I had the ticket” Martyn continued, before admitting “it was nice to have it confirmed on the phone that ‘yes you have won’ - It’s still not really sunk in!

The money has come in handy as Vicky has recently been off work due to an operation and it has also given us a bit of extra cash for Christmas.

Plus we’ve got a roof leak in the garage so it will come in nicely to pay for that. We’d probably have to cancel a holiday to get that done or go on less holidays but now we can do both. We’ve even got a Caribbean Cruise booked in March!”

Martyn gave a final comment stating “I always advice people to play The Health Lottery and we’ll certainly carry on now we’ve won. It’s well worth the money for £1 a go and you have more chance of winning the smaller prizes.”