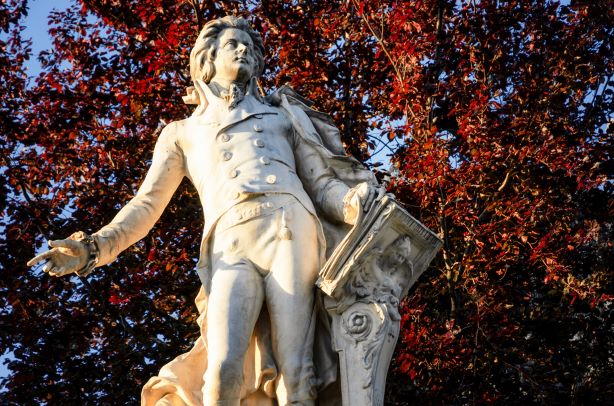 Would Mozart Get Lottery Tickets Online?

Classical music and gambling have a lot more in common than you may initially think. It might surprise you to find out that the two are actually pretty intertwined. Classical operas have been written about and inspired by gambling, classical composers and musicians have both felt the joy and pain of winning and losing at gambling, while others have operated casinos in the music halls and operas where their music was being performed. Classical music is even connected with gambling today in casinos across the world from slot machines with classical music themes to the music that is played in the casinos themselves.

Gambling as an inspiration

Prokofiev wrote the Gambler, an opera about gaming and gambling. It was split into four different acts and is based on the short novel of the same name written by Fyodor Dostoyevsky. It is a story of gambling, loss, and love.

Another great example is The Queen of Spades written by Tchaikovsky, loosely based on the short story of the same name, written by Alexander Pushkin. This opera follows the story of a young officer in the Russian army and his love interest, which later turns tragic as the young man becomes obsessed with learning her grandmother’s winning gambling secret.
The Card Game, written by Stravinsky is a ballet that follows cards playing a game of poker. The ballet serves as a reminder that, much like in real life, even those cards that are of higher ranking can sometimes be defeated by cards of lower face value.

Casino Paradise, by William Bolcom is a modern example of a classical music piece inspired by gambling. The story follows a rich tycoon who gambles on greed, then eventually love.

Even Mozart had ties to gambling. It is believed that he was an avid gambler and as a result, his subsequent gambling debts were frequently taken out of his earnings. He is not the only one either to have run into problems with gambling. Paganini, a celebrated concert violinist and composer, pawned his own violin to pay off his gambling debts, only to have to borrow a violin in order to perform in a concert.

The Italian composer Rossini, on the other hand, found a way to benefit from an interest in gambling. He ran a gambling casino in the opera house where his music was performed, thus ensuring him a cut of the profits.

These are only a few examples of famous musicians and composers that gambled. It would be a safe bet to say that any one of these composers would be inclined to get lottery tickets online, if only they’d had access to the internet.

Even today, classical music plays a large role in gambling. From classical themed slot machines to the very music that is played in the casinos, its influence can still be found. Research has shown that the music that is played in the game while game play occurs can have a huge impact on how long a player plays the game. Really well-composed music tends to blend in the background of the game, where as music that does not fit the game or is discordant often frustrates the player and causes them to stop playing. To avoid this to some extent, owners and operators have brought in games that have themes based on famous classical composers and their works. Even gaming sites like Health Games look to classical music to encourage players to get lottery tickets online.

Casino owners and online gambling site operators have also found that the type of music that is played while gamers are gambling can have a huge impact on how long a player plays and even their temperament while they are playing. Scientists have discovered that playing classical music in casinos can heighten a players pleasure while playing. It lowers a player’s blood pressure while enhancing all of their emotions. When a player has a winning hand, the classical music helps amplify the pleasure the player experiences. It has also been shown that classical music can help lower a player’s blood pressure, thus making them less likely to get into an altercation while playing.

There are many great benefits of the lottery, from the pleasure and joy at a win, to the financial contributions of charity gambling to society lottery organisations and other worthy causes. That being said, it is always good to remember that problem gambling is never something that has to be faced alone. It is important to be aware of how to get help and where to find it should you or a loved one be faced with problem gambling; information is available on our Play Responsibly page. You can be inspired by Paganini’s music, but you don’t have to follow his footsteps and pawn your treasured belongings. Help is available.

Would Mozart get lottery tickets online? Would Stravinsky have played online poker? Would Paganini have composed music about scratch cards? We will never know for sure, but we can still enjoy their classic compositions today while we enjoy modern, fun, responsible gambling on our computers and mobile devices.